Chief Justice O’Connor recapped her 12 years leading Ohio’s judicial system and shared her vision with what she would like to see happen in the state’s courts. 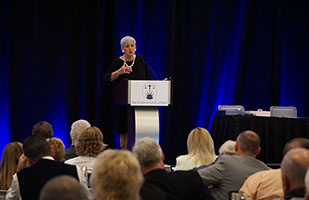 Chief Justice O’Connor recapped her 12 years leading Ohio’s judicial system and shared her vision with what she would like to see happen in the state’s courts.

Chief Justice Maureen O’Connor delivered her final State of the Judiciary address Thursday to more than 400 judges gathered at the Ohio Judicial Conference Annual Meeting in Columbus and streamed live to all Ohioans.

Chief Justice O’Connor – the longest-serving, statewide elected woman in Ohio history – touched on many of the accomplishments achieved during her 19-year tenure on the Supreme Court of Ohio, including two six-year terms as chief justice. She also discussed the challenges ahead for the state’s judicial system and the important role judges play in the lives of everyday Ohioans.

The chief justice told the judges that when she took office, she committed to working together to face the uncertainty and challenges ahead.

“Together – over the last decade – we have seized and created opportunities. There has been positive change,” she said.

She thanked the many people who have worked on task forces to tackle big problems. And she gave credit to many judges, attorneys, court staff, the legislature, and members of the public who have participated in finding innovative solutions to problems.

“There don’t always have to be losers in order to have winners,” said the chief justice in explaining the value of compromise. “Sometimes the final result is a great outcome because even though everyone didn’t get everything, nobody got nothing.”

Chief Justice O’Connor talked about technology driving the greatest changes in modernizing courts and advancing the administration of justice. Through the pandemic, Ohio was ahead of other states, which she credits to more than $38 million the Supreme Court has invested in local courts’ technology during her administration.

“Technology is a good investment,” she said. “In the administration of the judiciary, we must be careful spenders. And an investment of technology pays for itself many times over.”

Among the top issues Ohio courts have addressed in recent years is the opioid epidemic. The chief justice praised the judicial officers for their roles in trying to deal with the crisis.

She noted that in 2013, Ohio began certifying specialized dockets to tackle cases involving offenders with drug and alcohol abuse and mental health disorders. With more than 263 specialized dockets, Ohio is a national leader in using these programs to find treatment and solutions for offenders while also holding them accountable.

While courts are driving solutions to cope with opioid and synthetic drug issues, Chief Justice O’Connor cautioned judges not to let down their guard. As she leaves the Supreme Court, her role in the effort will end, she said, and she urged others to continue to improve the system.

“We have to keep on fighting, for the health of our communities, and the futures of our children and our families,” she said.

The chief justice also discussed the critical roles judges play in ensuring Ohioans know about the courts and instilling confidence that legal issues are resolved by an impartial judiciary.

“Get out into the public and talk about what you do. Let voters hear about all the good and fair work of judges,” she said.

Court News Ohio will feature a series of stories beginning next week exploring more of the topics addressed in the State of Judiciary and the historic impact Chief Justice O’Connor has made on the state’s courts.

What Others Are Saying – Judges, attorneys, and court officers share their stories of the impact the chief justice has had on their courts, the legal community, and justice for all Ohioans.

A Look Back – Society and the judiciary have undergone many changes since Chief Justice O’Connor was elected to lead the Supreme Court. She shared milestones and achievements during her time as chief justice.

Acting Locally – The chief justice called on Ohio judges and the judiciary to strive to build the best judicial system in the world. Judges explain how they plan to meet the challenges they face in their courtrooms and communities.

What Lies Ahead – Chief Justice O’Connor, who will retire at the end of the year, shares her vision for a strong Ohio judiciary in the years ahead.

Chief Justice O’Connor, in addition to her two decades on the Supreme Court, has been a magistrate, Summit County common pleas judge, Summit County prosecutor, director of the Ohio Department of Public Safety, and lieutenant governor.

She is not eligible to run for election again, because the Ohio Constitution sets an age limit on judicial candidates.