In its opposition letter sent to lawmakers in the final days of the session, the California State Sheriffs’ Association decried the extra administrative costs the bill would place upon them, noted the possibility that it would open their offices to legal liability and bemoaned the fact that the policy would turn much of the state into a gun-free zone.

Other bill watchers noted that judges, retired police officers and prosecutors — professionals likely to have the ear and sympathy of many lawmakers — are disproportionately represented among the state’s concealed carry license holders.

Backers of the bill may have also been victims of their own overconfidence and eagerness. They tacked an “urgency clause” onto the bill, so it would take effect as soon as it was signed by the governor, rather than waiting until Jan. 1. That decision raised the threshold needed to pass the bill from a simple majority to two-thirds.

Without that clause, the bill would have passed the Assembly and likely the Senate.

“Obviously, if we thought it was going to fail, we wouldn’t have put in the urgency cause,” Portantino said later Thursday.

The two Assembly Democrats who voted “no” were Ken Cooley from Rancho Cordova and Bakersfield’s Rudy Salas. Both often take a more skeptical eye toward gun regulations and both are facing competitive elections against Republicans in November.

Assemblymember Jim Cooper, sheriff-elect in Sacramento County, abstained from voting, as did fellow Democrats Joaquin Arambula of Fresno and James Ramos of Rancho Cucamonga. Because the bill needed 54 “yes” votes to pass, failing to cast a vote one way or the other amounts to a tactful way to vote “no.”

But Portantino reserved a special degree of outrage for Patrick O’Donnell, a Democrat from Long Beach, who also declined to vote on the measure.

“To come up one vote short is beyond frustrating and to know that one Assemblymember purposely reversed his vote specifically to kill this important public safety measure is reprehensible,” the senator said in a statement. “California is less safe today because of that action and I am committed to bringing this bill back on December 5th when the chief obstructionist won’t be here to block it.”

O’Donnell, who decided not to seek reelection in November, voted in favor of an earlier amendment to the bill, but did not support the proposal outright when it came up numerous times on the Assembly floor. In an interview, Portantino declined to speculate on the reason behind O’Donnell’s vote. “It’s his conscience and his decision, so you’ll have to ask him,” he said.

In a statement of his own, O’Donnell rejected the idea that he alone was responsible for killing the bill and said that he had concerns about its legal viability.

“I wish I was powerful enough to single-handedly kill any bill. There are 120 members of the Legislature and many of them did not support this bill. That is why it failed,” said O’Donnell, who got into a heated debate with Portantino in June over his decision to kill one of the senator’s bills without a hearing as chairperson of the Assembly Education Committee. 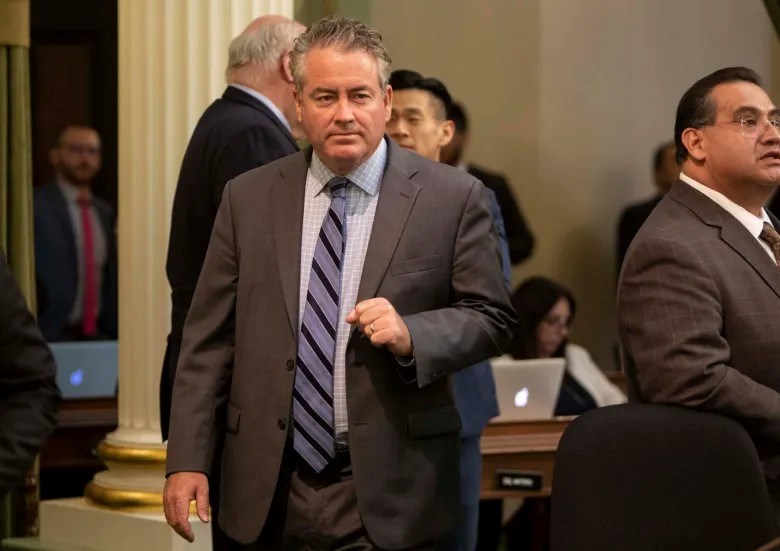 “I’m not going to pass something, even on my last day in the Legislature, that may not be constitutional,” O’Donnell said. “Senator Portantino needs to look in the mirror as to why this bill failed.”

Portantino said he wants to “get it through the system as quickly as possible” in the next session and that he would prefer to keep the urgency provision. Without it, any new law wouldn’t take effect until July 1 at the earliest if it’s incorporated into the state budget. Otherwise, the default start date would be Jan. 1, 2024.

Without the bill’s new rules, the pressure is now on county sheriffs to start handing out concealed carry licenses under the Supreme Court’s new standard, if they aren’t in compliance yet.

Many already are — and were even before the ruling. Because California’s prior licensing system granted local discretion over who has “good cause” to have a concealed carry license, counties with gun-rights sheriffs, including Sacramento, Orange County and Fresno, assumed any applicant who met the bare minimum standard as having good cause enough.

But for liberal-leaning urban areas on the coast, changes may be coming.

Some “will be dragging their feet,” said Chuck Michel, president of the California Rifle & Pistol Association. “But the sheriffs are going to start issuing, and they’re going to be sued very quickly by us if they don’t.”

San Francisco, for example, issued just 11 concealed carry permits over the last decade, rejecting all other applications as unnecessary. Since the Supreme Court’s ruling, the department has received 40 applications, said spokesperson Kelvin Wu.

“We have issued no concealed carry permits as of yet. We are finalizing changes to our policies and practices based on the change in the law,” he added.

Now that no change in law is forthcoming from the Legislature — at least not in the short term —  the effects of the Supreme Court ruling that Newsom, Bonta and Portantino wanted to shield California from are likely to arrive before long.