The government’s opposition came in response to court filings by several news organizations, including The Associated Press, seeking to unseal the underlying affidavit the Justice Department submitted when it asked for the warrant to search Trump’s Mar-a-Lago estate earlier this month.

Trump, in a Truth Social post early Tuesday, called for the release of the unredacted affidavit in the interest of transparency.

The court filing — from Juan Antonio Gonzalez, the US attorney in Miami, and Jay Bratt, a top Justice Department national security official — argues that making the affidavit public would “cause significant and irreparable damage to this ongoing criminal investigation.”

The document, the prosecutors say, details “highly sensitive information about witnesses,” including people who have been interviewed by the government, and contains confidential grand jury information.

The government told a federal magistrate judge that prosecutors believe some additional records, including the cover sheet for the warrant and the government’s request to seal the documents, should now be made public. 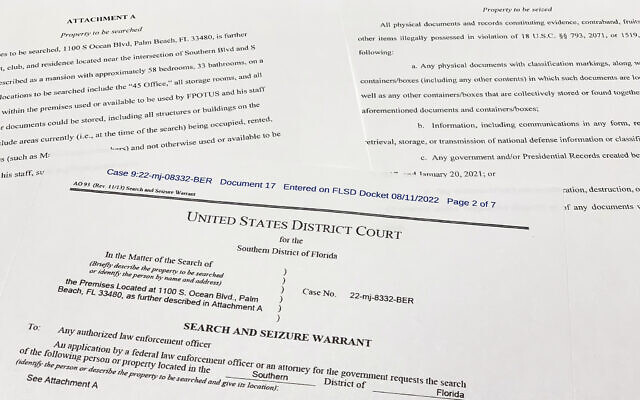 A property receipt unsealed Friday showed the FBI seized 11 sets of classified documents, with some not only marked top secret but also “sensitive compartmented information,” a special category meant to protect the nation’s most important secrets that if revealed publicly could cause “exceptionally grave” damage to US interests. The court records did not provide specific details about information the documents might contain.

The search warrant, also unsealed Friday, said federal agents were investigating potential violations of three different federal laws, including one that governs gathering, transmitting or losing defense information under the Espionage Act. The other statutes address the concealment, mutilation or removal of records and the destruction, alteration or falsification of records in federal investigations.

The Mar-a-Lago search warrant, carried out last Monday, was part of an ongoing Justice Department investigation into the discovery of classified White House records recovered from Trump’s home earlier this year. The National Archives had asked the department to investigate after saying 15 boxes of records it retrieved from the estate included classified records. 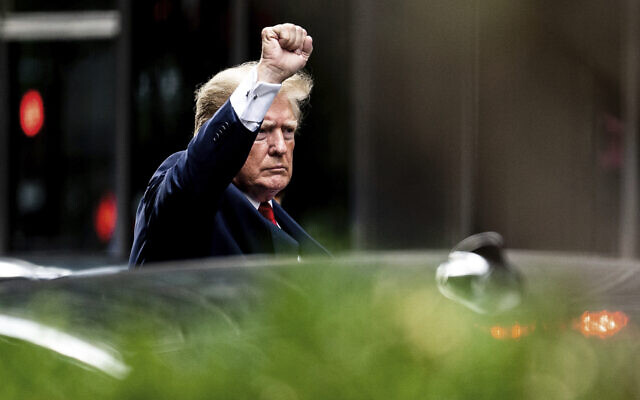 Former US president Donald Trump gestures as he departs Trump Tower, August 10, 2022, in New York, on his way to the New York attorney general’s office for a deposition in a civil investigation. (AP Photo/Julia Nikhinson)

It remains unclear whether the Justice Department moved forward with the warrant simply as a means to retrieve the records or as part of a wider criminal investigation or an attempt to prosecute the former president.

Multiple federal laws govern the handling of classified information, with both criminal and civil penalties, as well as presidential records.

But the Justice Department, in its filing Monday, argued that its investigation is active and ongoing and that releasing additional information could not only compromise the probe but also subject witnesses to threats or deter others from coming forward to cooperate with prosecutors.

“If disclosed, the affidavit would serve as a roadmap to the government’s ongoing investigation, providing specific details about its direction and likely course, in a manner that is highly likely to compromise future investigative steps,” the government wrote in the court filing.

Supporting The Times of Israel isn’t a transaction for an online service, like subscribing to Netflix. The ToI Community is for people like you who care about a common good: ensuring that balanced, responsible coverage of Israel continues to be available to millions across the world, for free.

Sure, we’ll remove all ads from your page and you’ll unlock access to some excellent Community-only content. But your support gives you something more profound than that: the pride of joining something that really matters.


Join the Times of Israel Community

We’re really pleased that you’ve read X Times of Israel articles in the past month.

That’s why we started the Times of Israel ten years ago – to provide discerning readers like you with must-read coverage of Israel and the Jewish world.

So now we have a request. Unlike other news outlets, we haven’t put up a paywall. But as the journalism we do is costly, we invite readers for whom The Times of Israel has become important to help support our work by joining The Times of Israel Community.

For as little as $6 a month you can help support our quality journalism while enjoying The Times of Israel AD-FREE, as well as accessing exclusive content available only to Times of Israel Community members.

Thank you,
David Horovitz, Founding Editor of The Times of Israel